The 25-year-old was named in Villa’s startting eleven for the third consecutive Premier League game in the entertaining 2-2 draw and was also among those shortlisted for the award, together with teammates Matty Targett, John McGinn and Anwar El Ghazzi.

Zimbabwean fans flooded the Villa Twitter page yesterday in full support of the Warriors midfielder, who consequently got 57% votes, while McGinn, El Ghazzi and Target got 38%, 3% and 2% respective.

Below are the results from the poll: 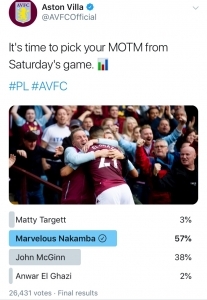