Zimbabwean fans on microblogging site Twitter have once again influenced a poll in favour of Aston Villa and Zimbabwe international midfielder Marvellous Nakamba.

Nakamba, who has local fans drooling over his move from Club Brugge to the Birmingham-based outfit, resoundingly won the previous poll on the Villa page for man-of-the-match against Burnley and is set for another triumph due to the influence of Zimbabwean fans.

This time, Villa fans fans based in London, the Aston Villa Lions, shortlisted Nakamba on the poll for the club’s player-of-the-month and he is currently leading the poll after amassing 93% of the votes.

Even though the poll is still open, indications are that the 25-year-old will win it comfortably. 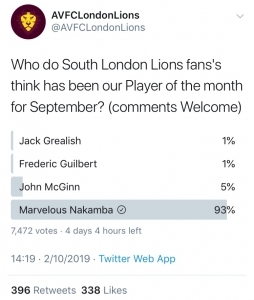