Arsenal coach blasts Xhaka’s behaviour, reveals how he intends to deal with the skipper 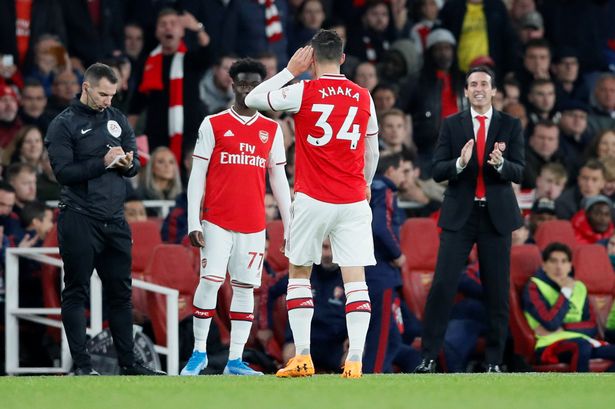 Arsenal coach Unai Emery has blasted Granit Xhaka’s behaviour after he was substituted during the 2-2 Premier League draw with Crystal Palace at Emirates Stadium on Sunday.

The skipper cupped his ear in a sarcastic gesture when the fans were booing him as he walked off the pitch.

He then took off his shirt, walked past Emery and stormed down the tunnel.

Speaking after the match, the gaffer revealed how he intends to handle the matter.

“He was wrong. We need to stay calm, speak to him internally about that,” said Emery.

“We are working with the club and the players to play under pressure. We are going to speak to him because the reaction was wrong.

“We are here because we have supporters. We work for them and need to have respect for them when they are applauding us and criticising us.”

When asked whether the Swiss will remain the captain, the coach replied: “Now is not the time to talk about that.”

It is not the first time Xhaka has been booed by his own fans this season after a similar incident happened in the game against Aston Villa last month.