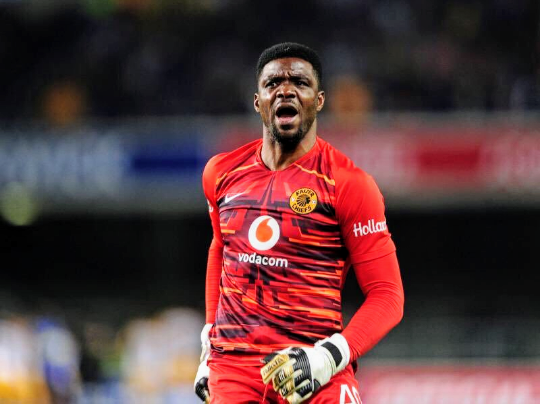 A sold-out crowd at the Moses Mabhida Stadium was  treated to an entertaining Soweto Derby as Daniel Akpeyi was the eventual hero in Kaizer Chiefs’ 4-2 penalty shootout victory over Orlando Pirates in the Telkom Knockout quarter-finals today.

The Nigerian shotstopper saved two penalties in the lottery after the traditional rivals of South African football had played out a 2-2 draw after extra time.

Pirates opened the scoring through Fortune Makaringe in the 34th minute, who slotted home from close range. The Buccaneers went into the break leading 1-0 despite Chiefs pilling pressure in search of an equalizer.

The turning point in the game came minutes after the restart after Pirates were reduced to 10 men when Mthokozisi Dube got his marching orders for a second bookable offence, both of them on Zimbabwean winger Khama Billiat.

Chiefs’ numerical advantange would eventually pay off in the 62nd after Colombian forward Leonardo Castro reacted quickly to a Billiat low shot which came back off the post to slot home Amakhosi’s equaliser.

The two teams cancelled out each other but could not be seperated after 90 mins, resulting in extra time.

Five minutes into extra time, Amakhosi were awarded a penalty after a handling offence in the Pirates box, the Buccaneers protested, but the referee stood his ground, justifiably so based on replays. Daniel Cardoso made no mistake from the spot to make it 2-1 to Chiefs.

Pirates quickly restored parity when Gabadinho Mhango cooly finished after some brilliant play by Thembinkosi Lorch on the left wing.

Just like last night in the Maritzburg United-Highlands Park game, the penalty shootout was needed to determine  who progresses to the last four and Chiefs prevailed 4-2.