Mutizwa shoots to the top of ABSA Premiership top scorers

The former Highlanders man has been impressive this season, and his strike from 12 yards in yesterday’s 1-2 defeat to Black Leopards was his eighth of the current campaign.

Mutizwa is tied on eight strikes with Highlands Park’s Peter Shalulile while Cape Town City’s Kermit Erasmus and Amazulu’s Bongi Ntuli are one goal adrift on tied on 7. 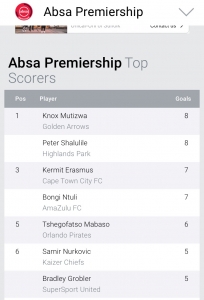