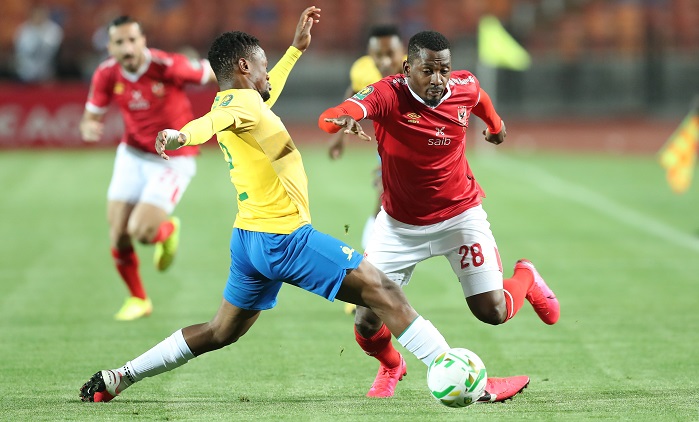 Mamelodi Sundowns suffered a 2-0 defeat against Al Ahly in the first leg of the Champions League quarterfinal clash played at Cairo International Stadium on Saturday.

The Southern Africans conceded both goals in the second half as they failed to pick a victory in Egypt against the Red Devils for the fourth successive time.

The hosts dominated the first half but were unlucky to get the opener during the period. Amr El Solia had the first real chance coming on his way but his header from a freekick went inches wide.

On the other end, visitors created a few opportunities but they never brought any trouble to the keeper.

With pressure rising on their side, Sundowns drew back towards the half time and managed to keep Al Ahly at bay until the interval.

But it didn’t last long as the home team finally broke the deadlock early in the second half when Ali Maaloul fired past Onyango from a Junior Ajayi’s cross.

The Red Devils kept up their momentum and were awarded a penalty in the 68th-minute after Ali Badji was brought down inside the box.

Maaloul stepped up and made no mistake to register his second goal of the day.

Despite Sundowns’ efforts to pull one back, Al Ahly remained disciplined and preserved their two-goal advantage going into the second leg of the tie.

Mohammed Nahiri netted both goals, striking first in the 11th minute before completing his brace ten minutes into the second half.

Raja Casablanca also won 2-0 against TP Mazembe with Ben Malango and Badr Banoun on target in either half.

The Tunisians grabbed the lead in the 27th minute through Abdelraouf Benguit but the advantage didn’t live long as Mohamed Ounajem equalised for Zamalek just moments after the half-hour mark.

Esperance were reduced to ten men in the 73rd minute when Mohamed Ali Ben Romdhane received a red card.

The expulsion proved costly as Achraf Bencharki and Mahmoud Ala soon hit the target to kill the contest as the home team secured a comfortable lead in the tie.