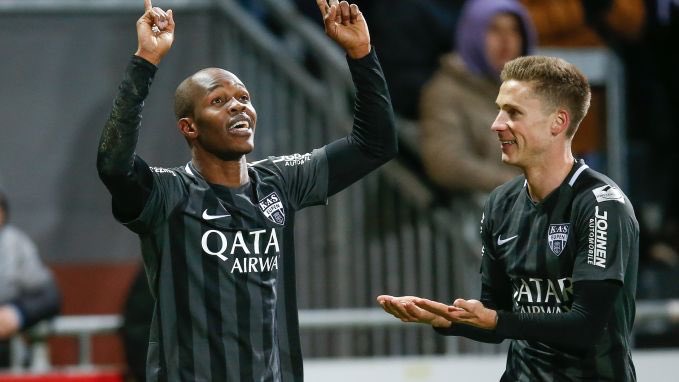 In a weekend filled with drama in various leagues across the globe, Zimbabwean flag bearers were part of the action and here is how they fared for their respective sides.

Knowledge Musona scored KAS Eupen’s winner in their 2-1 come from behind win over R Excel Mouscron in the Belgian League. This was Musona’s second goal for the side and a crucial one in their fight for survival.

New haircut, new look, same old Tino Kadewere. The striker returned from injury with a bang, needing just 3 minutes to open the scoring for Le Havre in their 3-0 mauling of Chatearoux. This was his 19th league goal of the season overally.

Marvelous Nakamba made a historic appearance at Wembley when he started for Aston Villa in their Carabao Cup final against Manchester City. He had a good game in the middle of the park, with only his challenge on Sergio Auguero, for which he was booked, his only blemish on a historic evening. Villa lost 1-2.

Victor Kamhuka played for 90 minutes in Ayeyawady United’s 1-0 win over log leaders Hanthawady United in the Myanmar League. The defender’s side have only conceded 3 goals in 8 matches.

Teenage Hadebe was sent off for a dangerous challenge on an opponent in Yeni Malatyaspor’s 0-2 defeat to Denizlispor in the Turkish Super Lig.

Macauley Bonne came on as a second half substitute in Charlton Athletic’s 0-4 defeat to Huddersfield in the English Championship.