Fans of Harare giants Dynamos have setup a fundraising program for their captain Partson Jaure as he battles to recover from injuries sustained when he was involved in a car crash.

The Warriors defender fractured his skull after he lost control of his car before it hit a tree near Prince Edward School last Sunday.

A United Kingdom-based Dynamos fan, who declined to be named, confirmed to Soccer24 that funds are indeed being raised for Jaure. 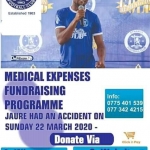