Warriors star Khama Billiat’s foundation, the Khama Billiat Foundation, has vehemently dismissed reports that they are going to donate food to Zimbabweans in Soweto.

A message which was circulating on various forms of social media claimed that Billiat and teammate Willard Katsade were to envisage Zimbabweans in Soweto on the 12th of April and donate food to them, suggestions which have been rubbished by the foundation’s spokesperson via the statement below. 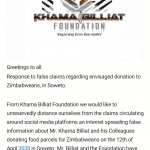