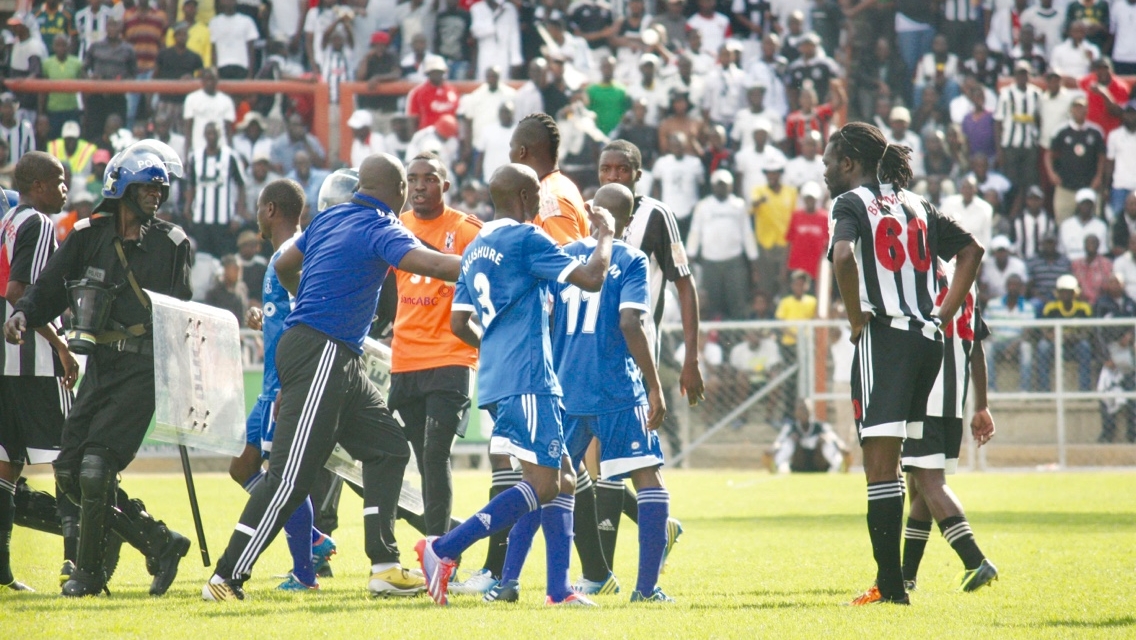 It is one of the most eagerly-awaited encounters on the local football calendar- they call it the ‘Battle of Zimbabwe.’

It is never short of drama both on and off the field but usually the latter. Arguably the biggest fixture in the Castle Lager Premier Soccer League, the encounter has in recent years been equated to Adrain Raine’s popular book; The Anatomy of Violence.

Crowd trouble is one of it’s biggest characteristic and regrettably, it might take until the next solar eclipse to come up with an explanation for the rampage. Rarely has any player from the two camps commented on the tension but this past week, Gilbert Banda, a former Bosso skipper, bravely shared his thoughts.

“Dynamos supporters are the most hostile. In my time they played a role in demoralising teams with their derogatory songs and insults. It took a strong mind to ignore them,” he told an online publication.’

Banda, the last Bosso captain to lift the league title in 2006, was involved in many battles between the two giants and argues that the DeMbare fans’ conduct was provocative, a view which they (DeMbare fans) have scoffed at.

“Its nonsense, absolute nonsense! Did he expect us to cheer Bosso when they wer playing against us. To give them a red carpet reception? Throw roses at them and give them a standing ovation. Matches of such magnitude are played both on the pitch and in the terraces. If we touched their nerves, and demoralised, perfect, goal achieved,” steadfast DeMbare fan Alvin ‘Aluvah’ Zhakata told Soccer24.

“Bosso fans themselves do that to other teams, and in particular Dynamos. Its like that anywhere else in the world. That’s the beauty of football. It shall always be like that and we are not sorry,” he added.

For United Kingdom-based Dynamos fan Gabriel Jaji, it’s a case of ‘wrong choice of words’ by the former Bosso skipper.

“Its puerile for him to say that. However, I strongly think it’s an issue of poor vocabulary selection. He probably wanted to say ‘aggressive’. What I know is Dynamos supporters don’t take a defeat lightly, thats why we have people like Ngoda, Admire(Teacher) and my brother Aluvha, who can spend the entire 90 minutes on their toes cheering the team,” explained Jaji.

Jaji insists the hostility trait is one for Highlanders fans.

“In terms of hostility and violence, its always Bosso fans who specialise in that,” he said.

Games between DeMbare and Bosso have ended in violence in recent years and even though there is a lot of blame-game involved in as far as the root of the animosity is concerned, it is clear that clashes between fans of the two sides are a macrocosm of Zimbabwe’s tribal conflicts which manifest in a football match.

For another die hard DeMbare fan Vita Chirunga though, that is not it- its a case of comments like Banda’s not being a true reflection of the actual situation.

“Gilbert Banda is just being defensive. Every time we go to Bulawayo, Highlanders fans sing denigratory songs attacking Shona people, and get that part well, I said Shona people, not Dynamos fans. They even got to a point of singing that Dynamos is a club for Mbare thieves but when they come this side (Harare) we do not sing such, we just cheer our time,” he said.

“So I don’t agree with Banda, as Bosso fans are even hostile and violent when they play other teams which are not Dynamos,” he added.