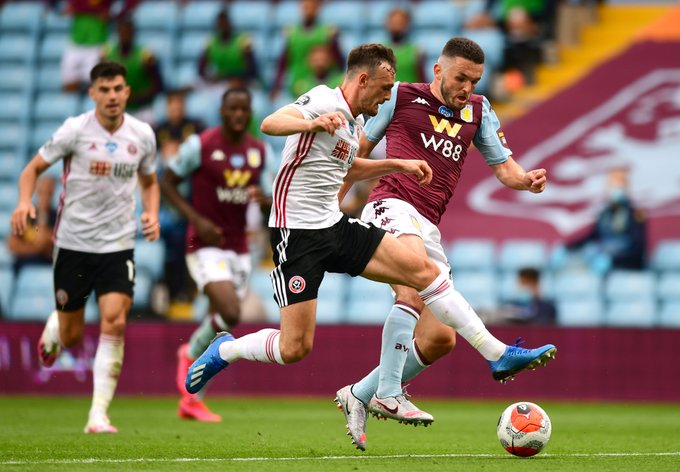 Aston Villa and Sheffield United played out a goalless draw on the day the English Premier League finally returned after exactly 100 days.

The clash at Villa Park marked the return of the English top-flight from the Covid-19 enforced break.

Villa coach Dean Smith made some changes to his side, with Pepe Reina, Mbwana Samatta, and Marvellous Nakamba starting on the bench while John McGinn made his first appearance since sustaining an ankle injury in December.

The Claret and Blue had a couple of early chances with Conor Hourihane’s short saved by Sheffield goalkeeper Dean Henderson while Keinan Davis headed just over.

Kotney Hause also had a decent chance on the hour mark but couldn’t direct his effort on target.

Perhaps the biggest talking point in the first half came in the 41st minute when Villa goalkeeper Orjan Nyland appeared to drag the ball over the goal line but goal-line technology ruled no goal, despite the ball appearing to have clearly crossed the line.

It was all square at the half time interval.

The second stanza produced some half chances as Smith’ men pushed for the opener, with Davies coming inches close to connecting Anwar El Ghazi’s low cross.

On the hour mark, Davies was denied by a brilliant Henderson save as the English goalkeeper kept his side in the game.

Smith took advantage of the drinks break in the 69th minute to make a double change, bringing in Samatta and Trezequet for Davis and El Ghazi respectively.

He would also bring in Nakamba and Elmohamady for McGinn and Konsa as his side searched for the winner.

The two teams would eventually settle for a share of the spoils.