Kadewere, Memphis on target as Lyon run-riot in the first half 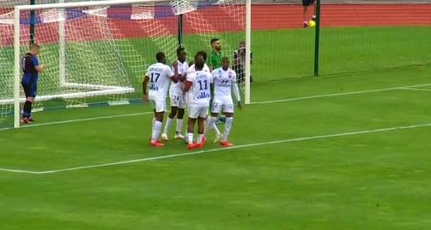 Tino Kadewere and Memphis Depay shared six goals as Olympique Lyon raced to 7-0 half time lead in their friendly match against Swiss side Port Valais.

Depay opened the scoring in the second minute, converting the penalty awarded to Lyon for a handball offense in Valais box.

The Dutchman turned from scorer to provider moments later, setting up Karl Toko Ekambi, who made no mistake from close range.

Kadewere made it 3, after being  perfectly set up by Jeff Reine-Adeleide to slot home his first goal for his new club.

Depay got his brace and Lyon’s 4th in the 18th minute before Kadewere also got his second and Lyon’s 5th, six minutes later.

The Zimbabwean striker would get his hat trick five minutes later, this time set up by Ekambi before getting his and Lyon’s seventh, set up by Memphis,  in the 32nd minute.