Warriors and Kaizer Chiefs star Khama Billiat’s picture has been used in an attempt to scam peolple on social networking site Facebook.

The pint-sized winger’s picture of him standing next to his Range Rover Lumma CLR the day he bought it, was hoaxed as one Nhlanhla Zulu, who supposedly joined a certain WhatsApp ‘stockvel’ with R350 but was now earning R20 000 and used some of it to buy the powerful SUV.

This comes barely a week after another Facebook user made use of  Billiat’s Amakosi teammate and fellow Zimbabwean Willard Katsande’s picture to lure people to his fake investment scheme which promises new members lots of money after a few weeks of joining. 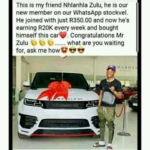