Ozil makes declaration on his future with Arsenal 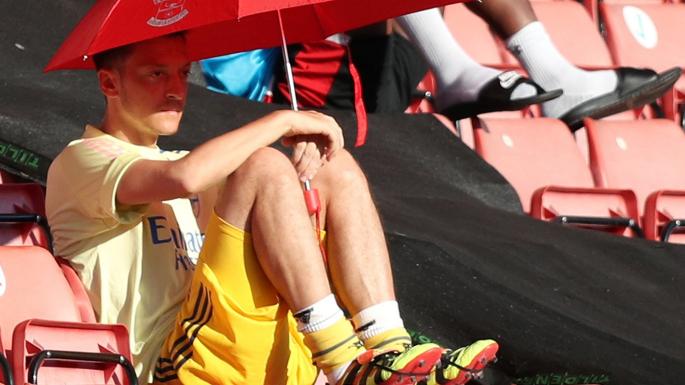 Mesut Ozil has claimed that he will not leave Arsenal before the end of his contract which expires in 2021.

The 31-year has been rumoured to be on his way out at the club after he was dropped to the bench in the Gunners’ final 10 Premier League fixtures last season. He also had to watch on from the sidelines as the Gunners won the FA Cup after getting permission to take a holiday in Turkey.

In an interview with The Athletic, Ozil stated that he will “give everything” for the club and that his four-year deal should be respected by all parties.

He said: “My position is clear,I’m here through to the last day of our agreement and I’ll give everything I have for this club.

“Situations like these will never break me, they only make me stronger. I showed in the past that I can come back into the team and I will show it again.”

“I’ll decide when I go, not other people. I didn’t sign for two or three years, I signed for four and that should be respected by everyone.

“Things have obviously been difficult but I love Arsenal, I love to work there, I love the people in the club — the real people, those I’ve been with for a long time — and I love London, it’s my home.

“Whatever happened in the last two seasons, I’m happy and very strong mentally. I never give up on anything. I want to help my team and I’ll fight for it. If I’m fit, I know what I can do on the pitch.”

On his relationship with coach Mikel Arteta, the midfielder said: “I can’t talk about my private conversations with the coach. But I can tell you I know my body well. I was fit enough to play every game before the break and, apart from a small injury, it was the same after.

“My daughter was born while we were off so maybe I was not always sleeping perfectly, but this is normal. I actually had more energy and excitement to play because of her. As a player, you sometimes have bad days and can’t always be happy, especially if you’re not playing.”