Peter Ndlovu blamed for Langerman mistake, but is he responsible? 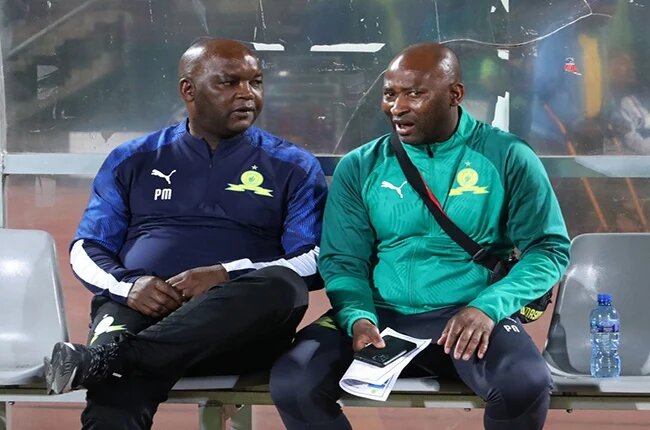 Mamelodi Sundowns fans are blaming team-manager Peter Ndlovu following a mistake on the team-list for the Nedbank final against Bloemfontein Celtic on Saturday.

Tebogo Langerman was named in Sundowns’ 20-man squad for the match, but the player was on suspension after accumulating four yellow cards in the final league game of the season last weekend.

The defender didn’t feature in the encounter, but according to the PSL rules, he was not supposed to take part in the warm-up and sit on the bench.

The development will see the club, if found guilty, facing disciplinary action but not getting stripped of the title.

Fans have taken to Twitter to voice their dismay on the incident and have blamed Ndovu for not picking that anomaly.

But the big question now is the former Warriors captain to blame?

A Sundowns teamsheet for the game, circulating online, was not prepared by Ndlovu who was not also part of the technical team on the day.

The club hasn’t communicated on the matter while Bloemfontein Celtic launched an official complaint at the PSL over player eligibility soon after the game.

Why Sundowns Will Keep The Nedbank Cup

According to former PSL general manager Andile “Ace” Ncobo, Sundowns can only get a fine if found guilty on the matter.

Posting on Twitter, he explained: “Celtic made a submission AFTER the match, which would then categorise their submission as a complaint rather than a protest.

“A protest regarding the ineligibility of a player can only be valid when submitted to the referee, in the presence of the opposing captain and an assistant referee no less than 30 minutes prior to kick-off (Rule 51.3).

“It, therefore, follows that Celtic did not lodge a protest with the League and therefore there is no disciplinary protest that places the match and its outcomes under review . . . any punitive measure will have nothing to do with the outcome of the match. Precedents show that Member Clubs escape with a monetary fine.”