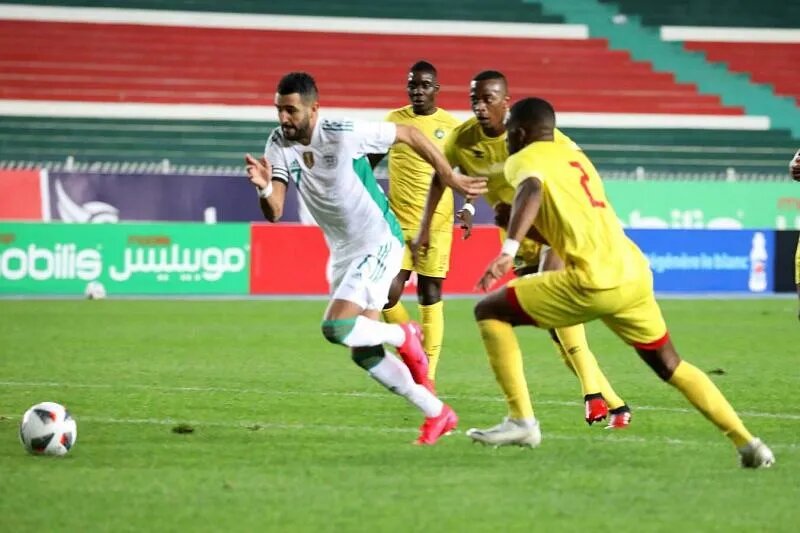 Manchester City correspondent, podcast host and YouTube creator Steven Mcinerney has sensationally claimed that Riyad Mahrez shouldn’t be heaped with praise for his goal against Zimbabwe because he was playing against ‘semi-pro players.’

The Manchester City winger dazzled past Adam Chicken to score an audacious goal to double the Desert Foxes’ advantage in the 2-2 draw at the National Sports on Monday, a goal which trended on social media after the game.

Spanish media even suggested that the goal be a contender for the 2020 Puskas award while others insisted it be the reason Mahrez finds game time at  City, where he has off late struggled to be in the team under Pep Guardiola but Mcinerney insists that shouldn’t be the case because he (Mahrez) was not playing against professional footballers.

”Just to elaborate. Mahrez is currently not in great form, like a few for City too to be fair. That’s not a dig. Just a fair observation. The person asked why he’s good here, and not in the PL. The correct answer is literally that. He’s playing against a semi-pro footballer,” he wrote on microblogging site Twitter.

“That’s not a dig. Just an assessment of why it may be working for him for Algeria, and not in the PL currently. I think it’s fair to say that PL defenders are vastly better & very used to how he plays. Currently Mahrez feels very predictable. He needs to shake that. Not a dig,” he added.

Ironically, Mcinerney cast a blind eye on the fact that one of the players in the Warriors squad, Marvelous Nakamba, is the only player from Southern Africa in the English Premier League while Tino Kadewere plays for Olympique Lyon, the team which knocked City out of last season’s UEFA Champions League.