FC Platinum have announced their travelling squad for the Champions League, preliminary round encounter against Costa do Sol on Saturday.

The Zimbabwe champions will leave for Mozambique today on chartered plane. The game is set for Zimpeto National Stadium in Maputo at 3:30 pm.

Here is the travelling squad: 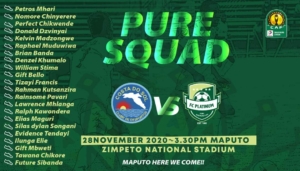