Marvelous Nakamba has earned his first XI appearance in the league at Aston Villa this season after being named in the starting line-up against Burnley.

The Zimbabwean midfielder was used from the bench in all the previous games of the campaign.

The opportunity to start follows the suspension of Douglas Luiz, who was sent off in the 1-0 win over Wolves last week.

The other option in that position, Ross Barkley, is not available due to an injury.

Kick-off is at 8 pm and the match will be live on SuperSport TV. 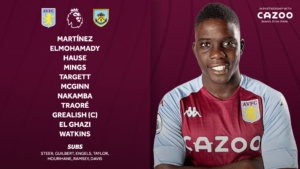