Once upon a time, the Undertaker ended a 34-year jinx at Old Trafford 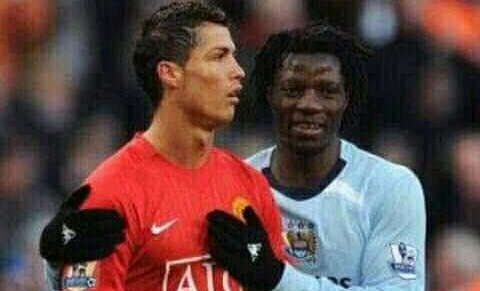 The Manchester Derby is arguably the biggest fixture on the English football calendar.

Manchester United and Manchester City’s rivalry has been there for decades and in it’s illustrious history, the clash has produced so many hard to forget memories.

When the two giants lined up for a Premier League clash at Old Trafford in February 2008, the Citizens had last tasted victory at the home of their bitter rivals in 1974.

Of the 22 players starting was Zimbabwean legend Benjani Mwaruwari.

The Undertaker was set to make his debut for City, following a 4.6 million pounds move from Portsmouth the previous month.

Proceedings started with a minute of silence in respect for victims of the Munich air disaster of 8 February 1958, before Darius Vessel thrust City ahead.

Mwaruwari, on his debut, doubled Sven-Goran Eriksson’s men’s lead on the stroke of half time.

Martin Petrov’s delightful cross was flicked home by the Zimbabwean striker, whose celebration matched the quality and importance of the goal.

The goal meant that the former Warriors skipper had made history twice on the same day; he became the first and only Zimbabwean to feature and score in the Manchester derby.

Michael Carrick’s second half goal proved to be just a consolation as Sir Alex Ferguson’s charges succumbed to a 1-2 loss, a result which was at that point, regarded as a dent to their title charge.

Mwaruwari’s goal propelled the Citizens to their first win at old Trafford in 34 years and he remembered the moment some time last year.

“That single goal in the Manchester derby changed everything for me. I became an instant hero, remember this was my debut for City and scoring in such a big game was no mean feat,” recalled Benjani.

“When I arrived at City I didn’t know the history associated with the Manchester derby in terms of head to head clashes. I only realized I had done something big when journalists started talking about that victory being the first for City at Old Trafford since 1974.”

“It made me famous, the fans accepted me, and players embraced me. Sometimes you are not that good as a player but if you work hard you can achieve your goals.”