Below is the Villa starting eleven for the clash, which kicks off at 21:15 local time. 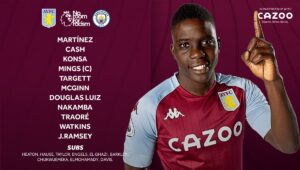