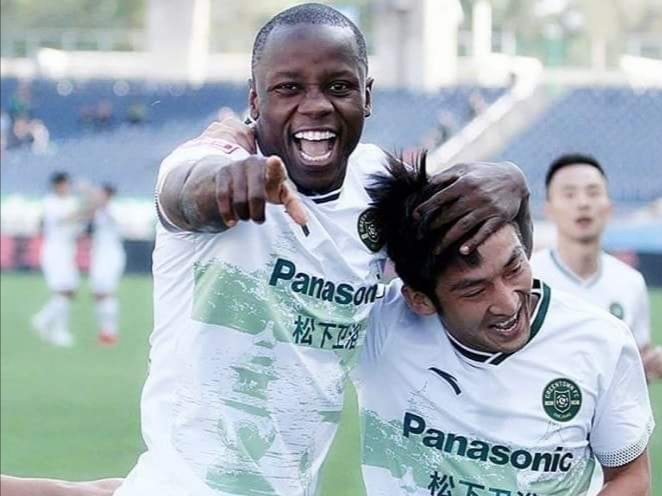 Nyasha Mushekwi scored a brace for Zhejiang Greentown in the opening match of the 2021 Chinese second division season against Zibo Sunday on Saturday.

The Zimbabwean striker found the back of the net twice in the second half, hitting the target for the first time in the 55th minute before coming back again in the 89th minute to seal his side’s 4-0 victory.

Mushekwi now has nineteen goals across all competitions since he joined Greentown in 2019 from Super League club Dalian Pro (formerly known as Dalian Yifang).

In Turkey, Teenage Hadebe produced another solid performance at the back to help Yeni Malatyaspor beat MKE Ankaragücü 2-1 in the Super Lig.

The defender completed the most passes in the match and had a success rate of 84%.

The successful outing comes a week after Hadebe made it into the Team of the Week of Matchday 35.

The midfielder had been included in the matchday squad but withdrew and watched from the stands after suffering tendonitis (inflammation of a tendon). The date of his return has not been revealed.

Also in the Ligue 1, Tinotenda Kadewere started from the bench and featured for a quarter-hour as Lyon went down 3-2 at home to Lille.

The striker was making his return to action after missing the team’s last three games due to a thigh muscle problem.

In England, Aston Villa midfielder Marvelous Nakamba was an unused substitute in the 2-2 Premier League draw against West Brom.

Admiral Muskwe made his seventh successive league appearance in the Championship for Wycombe Wanderers but could not save the side from losing 2-1 to Cardiff City.

The striker, who is on loan from Leicester City, had been instrumental in the previous rounds, scoring twice and created one goal in his last five games.

Wigan Athletic right-back Tendayi Darikwa also retained his starting berth in the starting XI against Burton in the League One.

The defender, who was making his 23rd consecutive start at the club since his arrival in January, delivered a decent performance as his side secured a 1-1 draw.

Bournemouth’s Jordan Zemura was not part of the Matchday squad that lost 1-0 to Brentford.