I would love to play for the Warriors one more time: Katsande 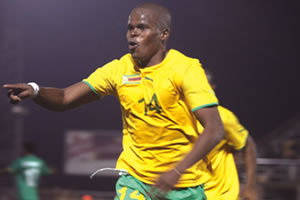 Former Warriors captain Willard ‘Salt and Vinegar’ Katsande has revealed that he is still open to one more Warriors appearance should he be needed.

The Kaizer Chiefs midfield linchpin (34), captained Zimbabwe at the 2017 AFCON finals in Gabon but drew a close his international career just after the continental spectacle.

Katsande’s retirement was under unclear circumstances though, as there were indications that he was blacklisted by the Philip Chiyangwa-led ZIFA board from representing Zimbabwe, hence the decision to quit.

He however, still believes he still has something to offer to the Warriors fold, if given the chance.

“Obviously, I would like to play for the national team for one or two games before I call it quits,” said Katsande according to The Herald.

“I am not saying I should be included in the national team, no.The coaches select the players based on form.What I am simply saying is that, as someone who still feels he has what it takes, I would like to play for my country, for one last time, and retire.”

“I am the Warriors number one fan and I know I have contributed so much for the team’s cause,” he added.