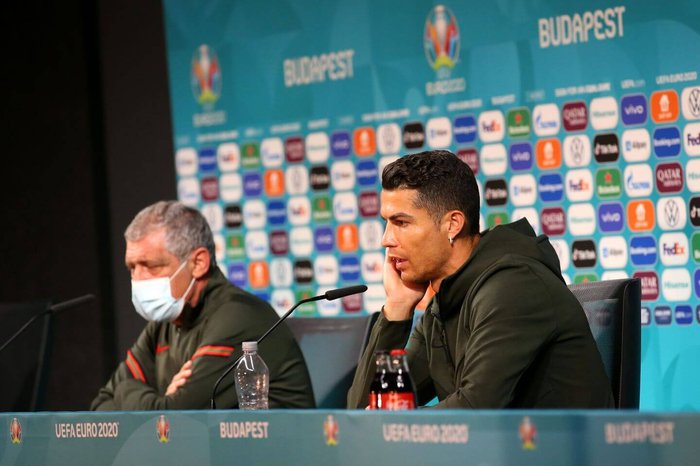 Coca-Cola reportedly suffered a huge drop in its share price after Cristiano Ronaldo’s gesture during a press conference on Monday ahead of Portugal’s 3-0 victory against Hungary.

The 36-year old removed bottles of Coca-Cola from the table and replaced them with a bottle of water while shouting ‘drink water’ as he sat down to speak to the media.

The soft drink company is an official sponsor of the Euro 2020 and had the product on display during the presser.

And now according to reports, this had an impact on Coca Cola’s market value on Tuesday.

The fizzy drink maker’s shares were worth $56.1 each when the market opened in Europe on Monday but promptly fell to $55.22. That is a 1.6 per cent drop which totals to a $4 billion loss.

However, Coca Cola has since recovered, and its share price has now risen back to $55.29 each which sums up to $238.35 billion overall.

Responding to the incident, the company, through an official, said “everyone is entitled to their drink preferences” and that everyone has different “tastes and needs”.

A spokesperson added: “Players are offered water, alongside Coca-Cola and Coca-Cola Zero Sugar, on arrival at our press conferences.”