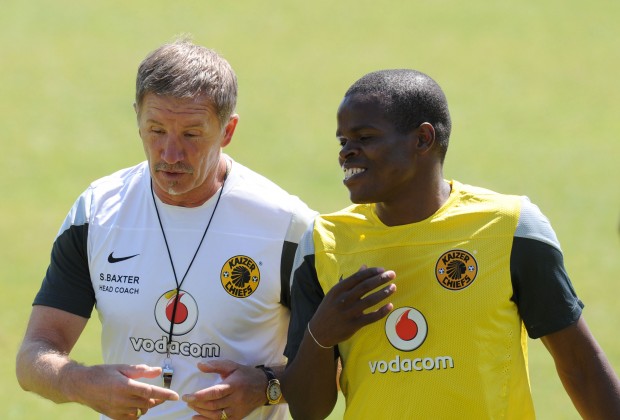 Willard Katsande has paid homage to Stuart Baxter after Kaizer Chiefs reached the CAF Champions League final for the first in their history.

Amakhosi beat Wydad AC 1-0 on aggregate in the semifinal with Katsande playing a pivotal role in the tie.

The Zimbabwean midfielder had struggled for game time for the majority of the campaign but returned to his best form and became a regular in the first team after Baxter replaced Gavin Hunt last month.

Though the Briton has never sat on the bench in all of Chiefs’ games since his appointment, the transformation has been worked on behind the scenes.

And Katsande has appreciated the gaffer’s influence in the team.

This is not the first time, Katsande has talked good about the coach.

A few weeks ago, he claimed the gaffer has brought new life in the squad.

He said: “Coach Stuart is a mastermind. He’s a great coach; remember, he was with the national team.

“He knows all of us, and some of us worked with him during his first stint at the club. So, I can say he had a big influence on our win in Morocco.

“Even the technical team he found at the club work nicely with him. So, it was quite easy to adapt to what he wants us to do.

“He’s a breath of fresh air in the group, to be honest. He knows Chiefs in and out.”

Katsande played under Baxter at Chiefs seven years ago and won several titles including a league championship.