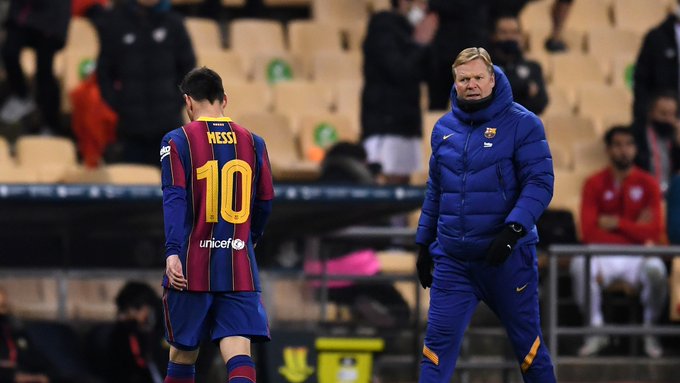 Lionel Messi has left Barcelona after a dramatic turnaround in contract negotiations.

The superstar was expected to sign a new deal on Thursday but the parties couldn’t iron out everything, ending his twenty-one stay at the Spanish side.

Barca confirmed the development in a statement on Thursday, saying the talks fell through due to the club’s financial situation.

A loan secured by La Liga from CVC Capital Partners was set to ease the situation and speed up the negotiations.

However, according to reports in Spain, Barca are opposed to the deal as it would officially end their pursuit of the European Super League.

This has left the Camp Nou giants with no option than to part ways with their captain as they couldn’t register him due to some La Liga regulations which requires them to balance their books first.

The statement reads: “Despite FC Barcelona and Lionel Messi having reached an agreement and the clear intention of both parties to sign a new contract today, this cannot happen because of financial and structural obstacles (Spanish Liga regulations).

“As a result of this situation, Messi shall not be staying on at FC Barcelona. Both parties deeply regret that the wishes of the player and the club will ultimately not be fulfilled.

“FC Barcelona wholeheartedly expresses its gratitude to the player for his contribution to the aggrandisement of the club and wishes him all the very best for the future in his personal and professional life.”