Percy Tau joining Al Ahly will not be a downgrade: Pitso 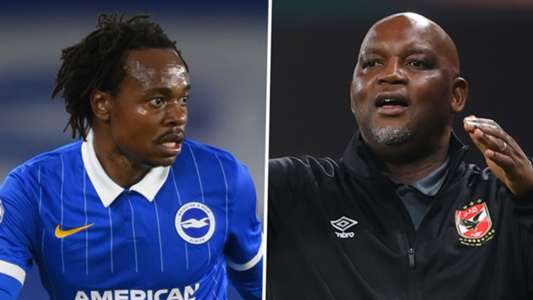 Outspoken Al Ahly coach Pitso Mosimane insists Bafana Bafana star Percy Tau joining the Red Devils will not be a downgrade because he is not playing regular football for years.

Tau is on the verge of joining the African champions from Premier League side Brighton and Hove Albion but some people opine that it will be a downgrade for the 28 year old.

Speaking in a live video with Rap star Casper Nyovest on Instagram, Mosimane detailed why he doesn’t believe Tau joining his side will be lower in status.

He continued: “So, those things are important. People say, ‘ah but he’s downgrading if he goes there’ but he’s not playing where he is.

“So, for me, I’d like him to come here. Any coach would like Percy come in Africa. Let him come and play Club World Cup against Bayern Munich; let him dribble Bayern.”