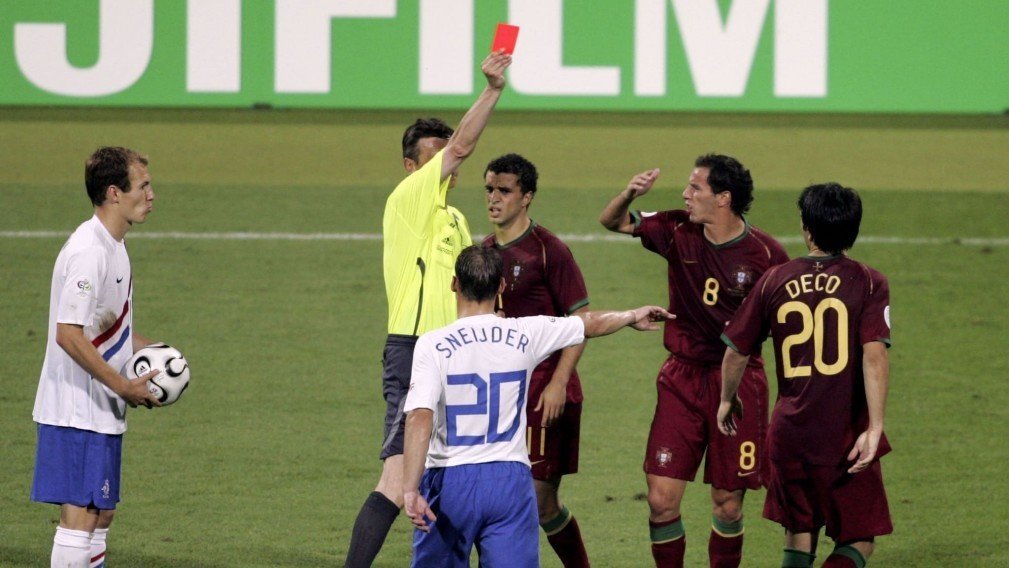 Popularly known as the Battle of Nuremberg, the 2006 World Cup Round of 16 tie holds the record for cards shown at any FIFA-administered international tournament.

Both teams were left with nine men on the pitch, with Costinha and Deco receiving red cards from the Portugal camp while Khalid Boulahrouz and Giovanni van Bronckhorst got expelled from the Dutch side.

How it started – The First Half
Netherlands midfielder Mark van Bommel was the first to be booked, less than two minutes into the game, after a crude challenge on Cristiano Ronaldo.

Five minutes later, defender Khalid Boulahrouz received his first yellow card of the game, while Ronaldo was the victim again.

The challenge left the Portugal star in pain, and he couldn’t continue and was subbed off in the 34th minute.

The two fouls seemingly ignited tempers on the Portugal side as Maniche was booked for a foul on Van Bommel after 19 minutes.

After the caution, the midfielder scored the match’s only goal three minutes later.

Shortly after the goal, Costinha received a yellow for fouling Philip Cocu. The Portugal’s defensive midfielder was then the first to be sent off just before halftime after being shown a second yellow card for a handball.

The Second Half
Petit, who came in for Pauleta barely a minute into the second half, was booked in the 50th minute for tugging Van Bommel’s arm.

Figo got his caution after headbutting Van Bommel during a touchline melee.

Boulahrouz, who received a yellow in the first half, got sent off in the 62nd minute after fouling Figo. The incident ignited a brawl on the touchline, leading André Ooijer and the Portuguese bench getting involved.

Portugal’s Deco followed up with his booking for fouling Dutch defender John Heitinga in minute 73.

Another touchline brawl started a few moments later after the Netherlands had not given the ball back from a throw-in conceded by Portugal to allow a player to receive medical treatment.

During the scuffle, Wesley Sneijder got a caution for pushing Petit to the ground. Rafael van der Vaart also received a yellow card, apparently for dissent.

After that, Portugal’s goalkeeper Ricardo (presumably for time-wasting) and left-back Nuno Valente (for a rough foul) also got yellow cards.

Deco got his marching orders after a second booking for delaying in the 78th minute.

Referee Ivanov made his last booking by issuing a second yellow for Giovanni van Bronckhorst in the final minute.

Aftermatch
The then FIFA president Sepp Blatter criticised referee Ivanov’s performance by saying: “I consider that today the referee was not at the same level as the participants, the players. There could have been a yellow card for the referee. This was a game of emotion, with exceptional drama in the last instant, with a deserved winner.”

Blatter later retracted his statement and promised to apologise officially.

Ivanov did not officiate again in the tournament’s remaining matches.

On Figo’s headbutt on Van Bommel, Portugal coach Luiz Felipe Scolari controversially approved the incident by stating after the match: “Jesus Christ may be able to turn the other cheek, but Luís Figo isn’t Jesus Christ.”

Deco and Van Bronckhorst, who both received reds cards, were spotted sitting together on the sidelines having a discussion. The two players were teammates at Spanish club Barcelona.