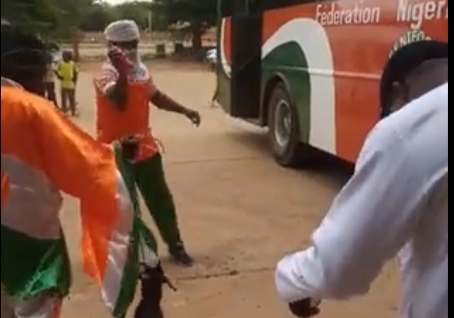 The CAF Confederation Cup fixture between AS Douanes of Niger and Nigerian club Kwara United in Niamey was marred by controversy after the host team reportedly hired herbalists to perform rituals on their opponents just before the kick off.

Two men, wrapped in shemaghs, were caught on camera sprinkling blood on Kwara United players as they disembarked from their team bus at the match venue.

The video was shared by United, who accused their hosts of engaging in juju in a bid to influence the match’s outcome.

#CAFCC HAPPENING NOW AT NIGER!
AS Douanes hired herbalists poured blood on @KwaraUnitedFC players as they are about entering the field. The 2 herbalists, 1 with keg of blood & the other with goat performed the act when the players are coming down from the bus. NO single policeman pic.twitter.com/jMt8FiEBrz

Despite the rituals, AS Douanes still crashed out of the CAF Confederation Cup on a 3-0 aggregate scoreline after the game in Niamey ended 0-0.

Kwara United will face Moroccan outfit RS Berkane in the second round of the interclub competition.