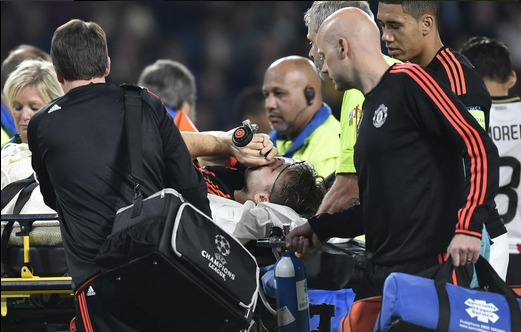 Luke Shaw faces a long stint on the sidelines after he was stretched off with a suspected broken leg during Manchester United’s Champions League match against PSV Eindhoven.

The young England left back had beaten two defenders and made a run into the box when he was caught in a challenge by PSV’s Mexican defender Hector Moreno.

The England defender was given oxygen while he was taken off the pitch.

Moreno was visibly shocked by the extent of the injury and walked away with his head in his hands as Shaw remained motionless on the turf.

It was a cruel blow for Shaw, as he had been in fantastic form for United after a mixed campaign last season following his record transfer from Southampton.

Footage of the incident shows Shaw’s right leg at an unnatural angle halfway down his shin, as he was tended to by the medical teams from both sides.

BT Sport pundit Michael Owen said: ‘A lot of the time, you will a challenge coming in a as a player you sometimes ride the challenge, but when you see the goal you plant your leg, thinking you have a chance to score. The player’s come in and he’s snapped his leg in half, basically. It’s a gruesome thing to see.’