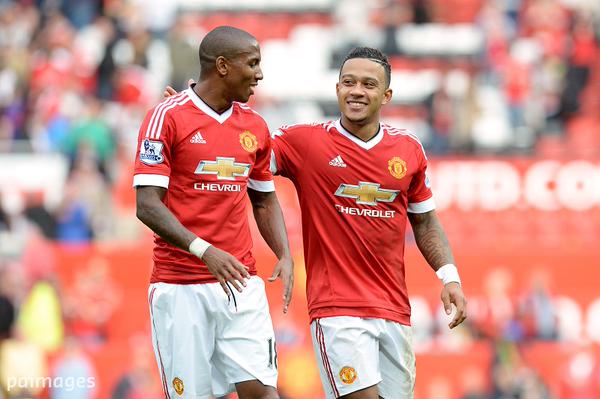 Ashley Young is targeting a clean sweep of trophies and says he can replace Luke Shaw in Manchester United’s starting line-up.

Ashley Young says Manchester United are determined to challenge for every trophy this season after they moved top of the Premier League.

Louis van Gaal’s side dispatched Sunderland 3-0 on Saturday to move above Manchester City in the table, following their 4-1 defeat to Tottenham at White Hart Lane.

With United back in the Champions League this season and having seen off Ipswich Town to progress in the League Cup, Young says silverware is firmly within their sights in 2015-16.

“We came into the season saying we wanted to fight for the title,” Young told MUTV. “A club like United wants to fight for everything we’re involved in – the league, the Champions League and both the cup competitions. We want to get ourselves back to winning silverware.

“We’re doing well in the league but there is a long way to go, so we just take each game as it comes.”

Young came off the bench to set up Juan Mata’s goal in the win over Sunderland but he started the victory over Ipswich at left-back, in place of the injured Luke Shaw.

And the former Aston Villa man says he is perfectly happy to replace Shaw in a more defensive role while the 20-year-old recovers from a double leg fracture.

“I’m a versatile player who can play there as well as on the wing,” he said. “I played there during the week in the cup and if the manager calls upon me to play there again I’ll go out there and give 110 per cent as I always do.

“I feel comfortable at left-back and playing wing-back. It’s a different role for me compared to left wing or left midfield, there’s more of the defensive side to think about but I’m capable of doing that.”

Shaw posted a photograph on his official Instagram page showing him back on his feet with the aid of crutches after surgery on his injury, and Young says the ex-Southampton star is positive about his recovery.

“Everyone has been in touch with him. I have personally spoken to him quite a bit,” added the 30-year-old.

“As the manager said he’s very positive. He’s got to stay that way because obviously it’s a long road to recovery. But he’ll have the medical department looking after him and knowing exactly what he needs to do to come back.

“Even the day after it happened he was positive and upbeat which I think for a lot of the players and staff was surprising after such a horrific injury, and when he returns to the training ground everyone will be there for him.”