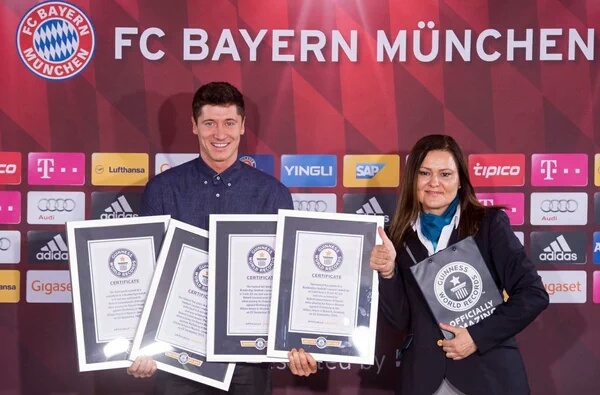 Bayern Munich striker Robert Lewandowski was officially honoured by the Guinness Book of Records on Monday after his stunning five-goal haul in a single Bundesliga match sent four records tumbling.

Lewandowski needed just eight minutes, 59 seconds to score five goals after coming off the bench in the second-half of Bayern’s 5-1 drubbing of Wolfsburg in Munich on September 22 for the German league leaders.

“It was an historic night for me,” said Lewandowski after being presented with four certificates.

He has claimed the record for the fastest hat-trick, which took him just 3:22, the fastest four goals, 5:42, the quickest to five and he is the first player in German league history to score five times off the bench.

“It took me a couple of days and weeks for it to sink in, my family were almost more excited than I was,” he said.

Lewandowski is planning to donate the football boots he used on the historic night to a charity.

The one record he failed to break was Dieter Mueller’s 38-year-old record of six goals in a single match, which he scored for Cologne against Werder Bremen in a 7-2 victory.

“Someone above clearly thought five goals was enough for me,” quipped Lewandowski.

The Poland star has scored 14 league goals so far this season.

He is second only to Borussia Dortmund’s Pierre-Emerick Aubameyang, who has netted 17 goals in 14 games, while Gerd Mueller, 70, holds the record of 40 goals scored in a single Bundesliga campaign set in the 1971/72 season.