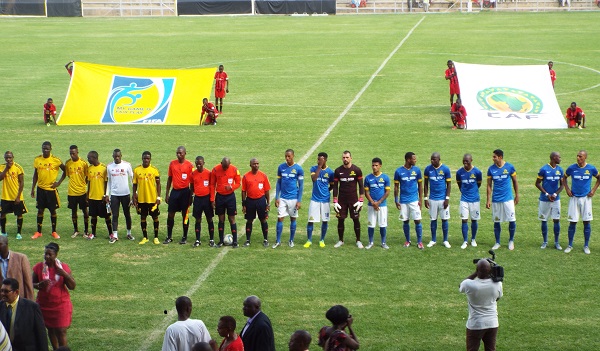 Chicken Inn proved they are not Zimbabwean Champions by fluke when they dismissed highly rated Mamelodi Sundowns 1-0 in the first leg of their CAF Champions League Preliminary stage match played at Babourfields Stadium this afternoon.

Chicken Inn looking unfazed by the occasion put up a sterling performance matching The South African giants pound for pound.

Obadiah Tarumbwa and Edmore Chirambadare combined well in attack putting the Sundowns defence under pressure for greater parts of the game.

The only goal scored came in the 36th minute from Mitchelle Katsvairo when he went on a run beat two Sundowns defenders before unleashing a shot from a tight angle.

Chicken Inn could have added more in the first half but let themselves down when they had Sundowns as their mercy.

Sundowns came back stronger in the second half but the Game cocks defence was unyielding keeping the scoreline in favour of the Zimbabwean Champions right through to full-time.

Sundowns fielded a full strength squad with the exception of fellow compatriot Khama Billiat who was reportedly not fit for the match.

In the process, Chicken Inn have effectively ended Sundowns’ 19 match unbeaten run in all competitive matches.

All is set for the return leg in a fortnight with the match certainly promising to be a thriller.