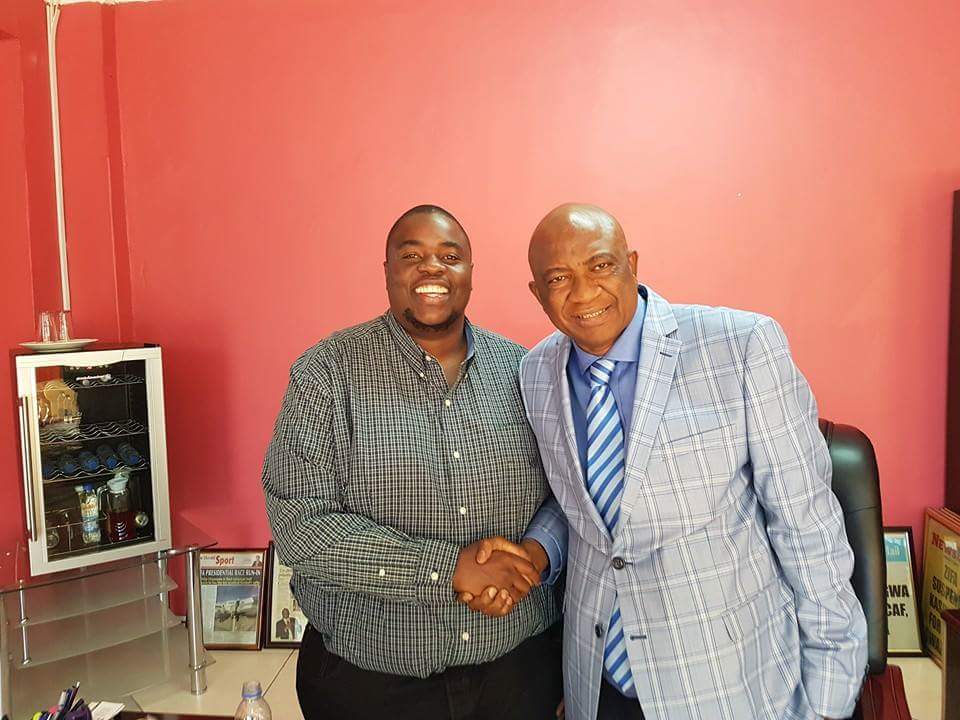 Socialite and Businessman Wicknell Chivhayo has made a sensational u-turn and has pledged to continue bankrolling the Warriors in their quest for qualification to AFCON 2017.

Chivhayo who recently withdrew his sponsorship citing ungratefulness of the coach and the media said on his popular facebook page that he has been advised by the first lady Grace Mugabe and will continue to provide his support in President Mugabe’s honour.

Below is the full statement from Chivhayo from his facebook page.

HALLO FRIDAY…..i keep getting astronomical touching emails and messages from our players and football supporters across the nation considering the FIASCO that has been happening in the last few weeks. The good news is during my recent interaction with ZIMBABWE’S MOTHER she politely requested me to continue supporting the Warriors at all costs. As much as i tried to explain my side of the story she said you are all my children and i won’t stoep so low and listen to the who said this and who said that. She encouraged me never to give up as well as to remain strong and expect criticism when executing national duty. She also strongly reprimanded me for recently attacking an Honourable cabinet Minister on social media. Regardless of their size , complexion or financial status by virtue of being a minster who was appointed by the President they all equally deserve utmost due respect no matter their views or opinions in any situation. Just as my own small indirect way of apologising to him I will identify a school of my choice in TSHOLOTSHO and donate text books and stationary worth 50 thousand dollars. I rest assured her that oversight will be corrected in future… Based on her polite request as an AMAZING MOTHER I would like to bring this confusion to rest and assure everyone that I am FULLY BEHIND THE WARRIORS till the end…WHO AM I TO DISREGARD ADVICE FROM AMAI VE ZIMBABWE….When i say I am fully behind the WARRIORS and i don’t mean just with my two hands and mouth in the stadium but with my HEART and my STRONG POCKET….It must be noted with due respect that this decision I have made is FINAL , IRREVOCABLE and IRREVERSIBLE…. She asked me to look at the bigger picture and see beyond a mere fight with journalists. She asked me to stand up and show the nation I am indeed a PATRIOTIC CITIZEN. She also asked me if HIS EXCELLENCY had sulked and thrown a tantrum after being tormented , criticized and tortured by whites during the liberation struggle would we have attained INDEPENDENCE ???? DEFINITELY NOT……ZIFA can gladly go ahead and look for an official corporate sponsor but be rest assured of my best financial support for the 20 PLAYERS and their COACH at all times….I would also like to sincerely apologize to HER EXCELLENCY THE FIRST LADY and thank her for the advice and also publicly assure her that RAIN OR SUNSHINE i will do whatever it takes and make sure we qualify for AFCON. Like any other ZIMBABWEAN i am your son and I’m still young so sometimes I admit I do act childish but I’m sure this is exactly what they mean when they say MARI INOPENGESA…AMAI VEDU i promise i won’t ever disappoint on the WARRIORS and if it means i have to join the team and start playing soccer myself I WILL…I used to play RUGBY at school and sports are similar because the concept of scoring is the same besides the fact that Pasuwa is my personal friend so there’s no way he won’t give me a midfielder position…I also want to also apologize to the MINISTER OF SPORTS HON HLONGWANE and ZIFA PRESIDENT DR PHILLIP CHIYANGWA for over reacting on the expense of the NATION…Having said that I want to over emphasize that my sincere apology is directed to these three people specifically and further I also want to take this opportunity to give all the journalists in the world PERMISSION to write anything they want about me….INI NE MA WARRIORS ANGU TIRI TESE….