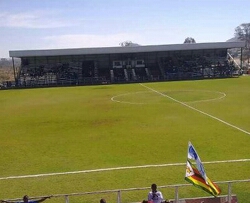 Premier League action may commence in Beitbridge as early as within a fortnight after the Beitbridge town council announced they will begin working on the PSL recommendations to upgrade the stadium.

Dulibadzimu stadium is home to Premier League new boys Border strikers. They have since been forced to play their home matches away in Zvishavane until an upgrade to their stadium is completed.

The PSL recommended that they increase the stadium capacity to 5000 up from their current 3000 as well as scaling higher their perimeter fence by 3 more meters.

Speaking to the Chronicle, Beitbridge town secretary Loud Ramakgapola said they have started working together with local businesses and should complete the upgrade on May 6.

“At the time of inspection, we had terraces that could
accommodate between 3,000 and 3,500 people against
a requirement of 5,000 by the PSL,” said Ramakgapola.
“In response to that we’ve started working on more
terraces on the western side of the ground, which will
carry around 2,500 and this will be completed in the
first week of May.
“On the issue of raising the perimeter wall, we’ve
engaged local businesses to install billboards that will
ensure that no spectators watch matches for free.
We’ve had a positive response on that front and by the
6th of May that will be sorted,” he said.