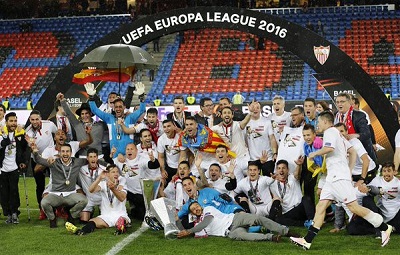 Spanish outfit Sevilla came from behind in Basel to beat Liverpool 3-1 and win the Europa League trophy for a third time in succession.

Liverpool took the lead in the 35th minute through Daniel Sturridge, but Kevin Gameiro levelled 17 seconds after the restart, before Coke netted a double as Sevilla won the competition for a record fifth time.

Sevilla, who face Barcelona in the final of the Copa del Rey this weekend, will now advance straight into the group stages of next season’s Champions League.

Liverpool, meanwhile, now face a summer of change under Klopp as the former Dortmund manager looks to improve on his team’s eighth-place finish in the Premier League.