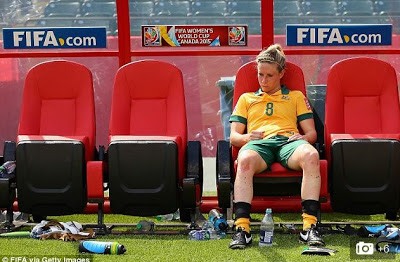 Zimbabwe Mighty Warriors opponents at the Rio 2016 Olympics Australia’s women’s football team ranked the fifth best side in world football lost 7-0 to a collection of 15-year-old boys in preparation of the Olympics games.

Australia who will be targeting a medal at the Rio Olympics in August, have cast a huge veil of doubt after they were embarrassed by the Newcastle Jets under-16s side on Wednesday.

Admittedly this was not the most fiercely competitive of friendly matches, with the women’s team employing a rotating team, but the Matildas, who often have no choice but to play boys teams such is the paucity of opponents in Australia, did have star names such as Katrina Gorry in their lineup.

Assistant coach of the women’s side Gary van Egmond admitted his side, who were without their overseas-based players, had been taken by surprise.

“To be honest we didn’t expect that,” he told The Huffington Post.

“But the Jets boys were very good. All credit to them. They moved the ball around very well and were excellent on the night.

“At this stage in their preparation, obviously the Matildas are not in a position to play regular games so I’d suggest all and sundry were a little bit rusty.”