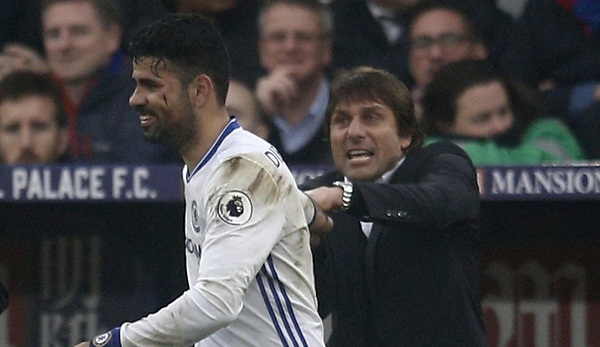 Stoke City twice fought back but it was not enough to prevent Chelsea racking up a record-equalling 4-2 victory at Stamford Bridge on Saturday afternoon.

The Blues were pushed hard by their opponents, who hit back through Bruno Martins Indi and Peter Crouch goals in the second half, but they did enough to make it a perfect 13 wins on the spin.

Willian scored twice, either side of goals from Gary Cahill and Diego Costa, to put Chelsea level with Preston North End, Sunderland and, most recently, Arsenal for successive games won in a single season.

In-form Manchester United came from one goal behind to record a 2-1 win over Middlesbrough in Saturday’s pulsating Premier League clash at Old Trafford.

Grant Leadbitter’s 67th-minute strike appeared to be securing all the points for the visitors, but Anthony Martial equalised in the 85th minute, before Paul Pogba headed Man United’s winner less than one minute later.

The result means that the Red Devils have now won their last five in the Premier League, which has seen them move to within one point of fourth-place Arsenal, who welcome Crystal Palace to the Emirates on Sunday afternoon.

Liverpool closed the gap on Premier League leaders Chelsea back to six points courtesy of a 1-0 victory over Manchester City at Anfield this evening.

Georginio Wijnaldum scored the only goal of the final Premier League game of 2016 as Liverpool ended the year by moving four points clear of third-placed City, who now find themselves 10 points adrift of Chelsea.

Liverpool, who have now won four consecutive league games against Manchester City for the first time since 1981