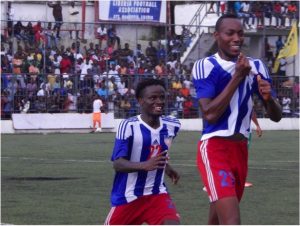 Liberia stepped up preparations for the crucial AFCON qualifier against Zimbabwe with a 1 nil friendly International win against Sierra Leone.

A 79th minute header from LISCR FC striker Christopher Jackson yesterday gave the home based-dominated Lone Star a narrow 1-0 win over the Leone Stars of Sierra Leone in an international friendly at the Antoinette Tubman Stadium.

Coach James Debbah used a predominantly young side as he seeks to identify players to compliment his foreign based legion. The young players were given the opportunity to showcase their talents on the national team, Coach James Debbah’s 22 selected players for the match were dominated by home based players, making up 19 of the 22 players.

Liberia will play Zimbabwe at the National Sports Stadium in the opening group G encounter of the 2019 AFCON qualifiers on Sunday the 9th of June.