Zlatan back at Man Utd 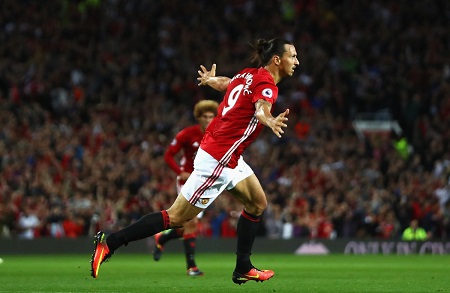 Manchester United have re-signed Zlatan Ibrahimovic on a one-year contract.

Ibrahimovic was released by the club in June after his season was ended prematurely by a knee injury, but he is expected to be fit again in December.

“After his contribution last season he deserves our trust and we will be patient waiting for him to return,” said manager Jose Mourinho.

Ibrahimovic said he turned down offers from “a couple of teams who wanted ‘Ibra-kadabra'” but chose to rejoin United because “we had such a great year” last season.

“I come back to finish what I started,” he told ESPN.
Ibrahimovic said he also believes the United squad has been significantly strengthened by this summer’s new arrivals.

“I am happy Romelu Lukaku came. We are stronger than we were last year. He has different qualities from me and [Marcus] Rashford.

“Lukaku called me and said ‘bro, can I have the number nine?’ I said I was not going to make it difficult for him – but I was going to take the number 10. I never left. I just upgraded my number.

“The signing of [Nemanja] Matic is big. He brings a stability to the team that the team didn’t have last year. He is the important one.”

Zlatan back at Man Utd