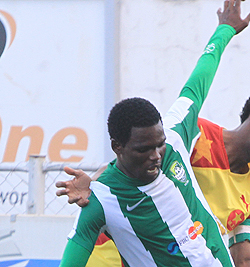 FC Platinum’ Ali Sadiki is willing to help his team win the league this season and play in CAF Champions League.

The midfielder who returned to the Zvishavane side in July had a three season spell at the African giants TP Mazembe.

Sadiki said his main objective as a player is to play in the champions league.

“As a player,i have always wanted to play in the Champions League every season. I want to create brand for my name in Africa,” he said.

“The objective which my team have is the same as mine. We need to win the league for us to play in the champions league.”

The 29 year old also said he had little to adjust to after his return from DRC. He has become a first team regular and owes everything to hard work.

“I once played in Zimbabwe and when i came back there was no difference. The coach just told me the philosophy of the team and i followed.”

Sadiki previously played for FC Platinum before he joined TP Mazambe in 2014.