Gidiza In Late Call Up 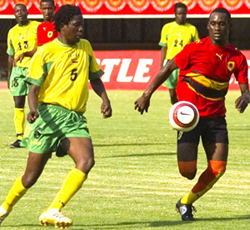 Former Warriors midfield maestro Ronald ‘ Gidiza’ Sibanda has been a late consideration for the Warriors Legends squad to face Barcelona legends at the weekend after public outcry.

There was outcry from fans who felt that Gidiza, one of the most gifted midfielders the country has ever had, cannot be omitted at the expense of the likes of Edward Sadomba.

Meanwhile some of the players named in the squad were still to receive formal notification from the Zimbabwe Football Association.

“ I just heard that I have been called to the squad through the media. I am still to receive a call as to when and where are we supposed to assemble. I am still in the dark ,” said one player.

The Warriors legends who will be coached by legendary coach Sunday Chidzambwa takes on Barcelona legends at the National Sports stadium on Sunday in an exhibition match meant to promote sports tourism. The Barcelona legends will then visit tourist resort town Victoria Falls on Monday before departing back to Europe.