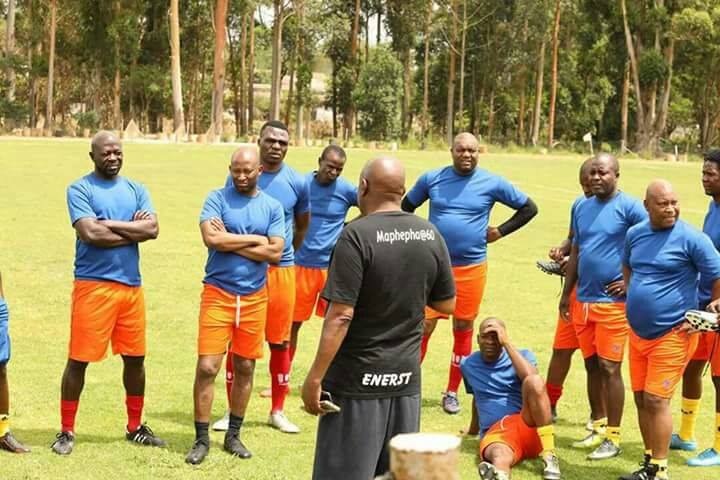 90′ And the referee blows to end this exciting match. What a game

86′ Shereni calls it a day. Ashley Rambanepasi comes in. Will the Compressor come up with something in the last minute

85′ Time flying, this is exciting. Real Legends in deed

83′ Goal!!!! ohhh my word, Dudaza Sadomba equalises for the Warriors Legends. Was it a cross, I don’t know but it finds its way to the back of the net

82′ Prophet Magaya bringing in some anointed runs. his effort is saved by the keeper

79′ Prophet Magaya comes in for Johannes Ngodzo. What a game from Signature

65′ 1999 World player of the year Rivaldo calls it a day. He hands his jersey to the vice president ….what an hounor

64′ Free kick quickly taken, Lupahla sends it to the skies

59′ Nutmeg!!!! Gidiza sends the ball right in between his opponent’s legs. First Nutmeg of the game

54′ Goal!!!! How did he do that. Zenzo Moyo with a brilliant overhead kick to pull back one. Great assist from Gidiza

53′ Ohhhh the woodwork have no mercy. Ngozo’s strike goes straight to the post

48′ Ngodzo still got the touch, doing his ‘signature moves’

43′ The referee blows for half time with two minutes left. Guess he is tired too

41′ Tinashe Father with a 360 degrees turn. Ohhhh he still got the touch

35′ Two glorious chances for the Warriors. Peter Ndlovu and Benjani sending their efforts off target.

34′ Did it reach the sky!!! Agent Sawu shoots way over the bar

32′ William Mugeyi calls it a day. Charles Yohane comes in.

20′ Agent Sawu comes in for Madinda. The crowd doesn’t like it

19′ Oh my oh my, what a great interplay by the Warriors Legends but Madinda sends his effort an inch wide

18’ Brenna Msika with another ‘brilliant save’

15′ Ohhh Moses Chunga calls it a day after 15 minutes. Keneddy Nagoli comes in

14′ Kaitano Tembo picks up a knock Wilfred Mugeyi replaces him

10′ Goal!!! Patrick Kluivert with another goal

3′ Brenna Msika with a save as Barcelona Legends breaks away

1′ William Mugeyi setting the pace with some fancy footwork