FC Platinum move to the top while Ngezi drop points

Ngezi Platinum slumped two places to third position after the were held to a two all draw against Chicken Inn in a match played at Baobab Stadium on Wednesday.

FC Platinum moved to the top while Dynamos are now second after match-day 32 of the Castle Lager Premier Soccer League.

Madamburo opened the scoring in the 29th minute through Clive Augusto before the visitors equalised ten minutes later after Darryl Nyandoro capitalised on a defensive blunder by the home team’s back line.

The Gamecocks went in to the lead for the first time in the 77th minute when substitute Collins Dhuwa slotted home but the lead short lived as Ngezi captain Patson Jaure restored parity three minutes later.

The game ended in a draw, giving advantage to Dynamos who moved to second place also on 64 points due to a better goal difference.

The Glamour Boys beat Bulawayo City 2-0 in a match played at Barbourfields Stadium.

Captain Ocean Mushure led by example when he netted the first goal in the 34th minute from a freekick. Quality Kangadze then doubled the lead a minute in to the second half.

Kangadze’s goal extinguished City’s hopes of a come back and the match ended with the scoreline unchanged. Amakhosi are now in the relegation zone after the defeat sitting on 15th place.

Across the city, Rodwell Chinyengetere’s second half strike earned FC Platinum three crucial points over Tsholotsho which sent them to the top of the table with 66 points.

Chinyengetere scored in the 55th minute and his goal decided the outcome in a match played at Luveve Stadium.

Meanwhile, Shabanie Mine moved out of relegation zone to 13th position with 36 points after they edged Hwange 1-0 at Maglas Stadium.

Richard Kawondera pounced on a rebound on just over the hour mark to score a winner for the Chinda Boys. They moved on top of Harare City who lost 1-0 to Black Rhinos.

The Sunshine Boys conceded in the second half when Cliff Chitsamba scored a magnificent strike.

CAPS United’s Dominic Chungwa extended his goal tally to 16 after he scored the only goal of the match against Yadah. 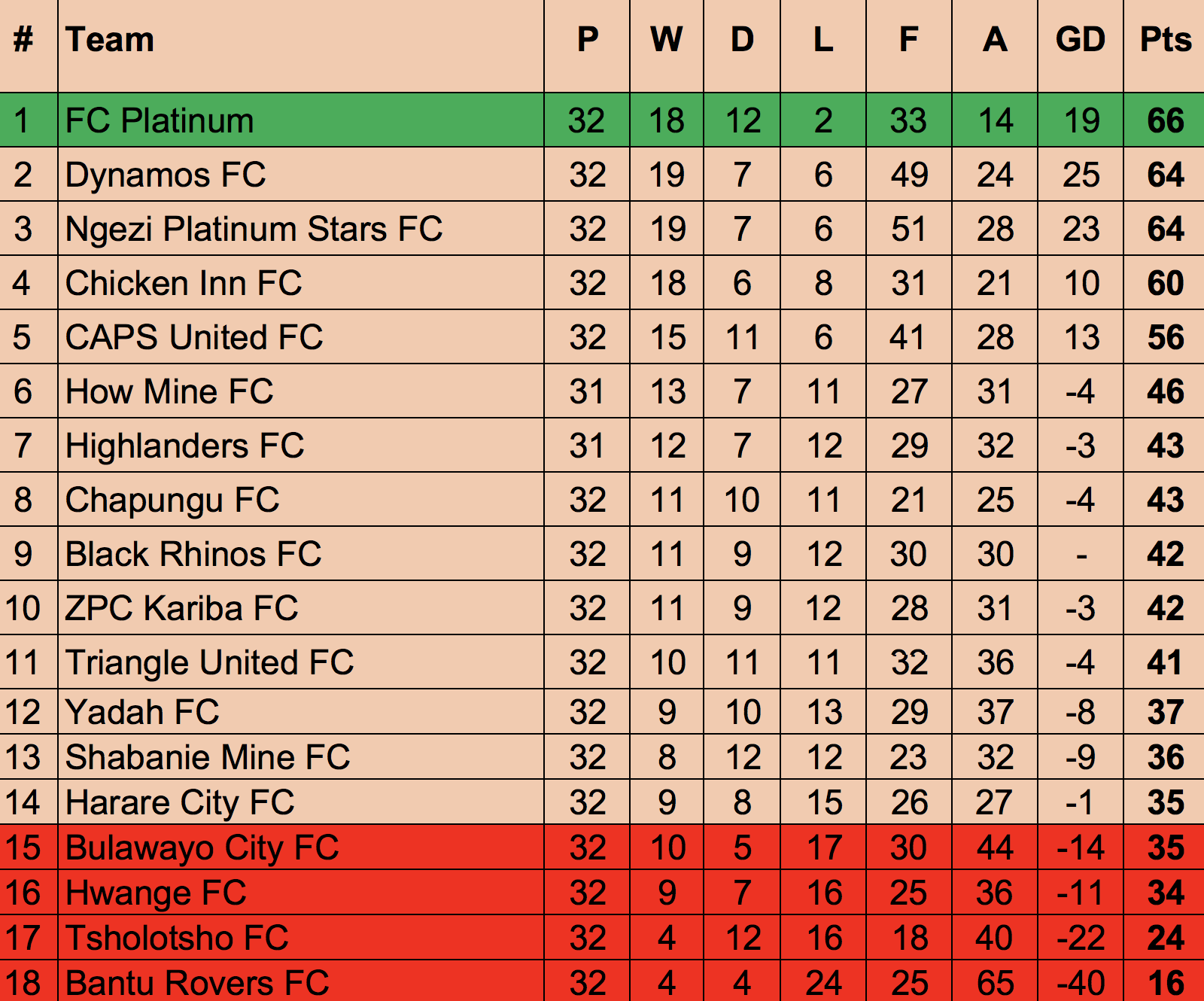