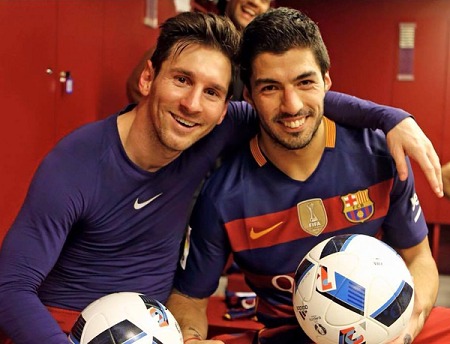 Second-half goals from Luis Suarez, Lionel Messi and Aleix Vidal saw Barca cruise to a 3-0 victory which gives them a nine-point lead at the top of La Liga and, just as importantly, a 14-point advantage over Real Madrid.

Suarez capitalised on wide open space in Madrid’s midfield to knock in a simple pass from Sergi Roberto following a breakaway move in the 54th minute. That opened the scoring after a tense but tight first half in the early afternoon sun at the Santiago Bernabeu.

Messi hammered in the second goal from the penalty spot 20 minutes later after Dani Carvajal was sent off for blocking a goal-bound header from Paulinho with his arm after Real were again easily picked apart on the counter attack.

Catalan defender turned winger Vidal hit the third in injury time to pile more misery on Madrid, who looked unrecognisable from the side who crushed Barca 5-1 on aggregate in the Spanish Super Cup in August.