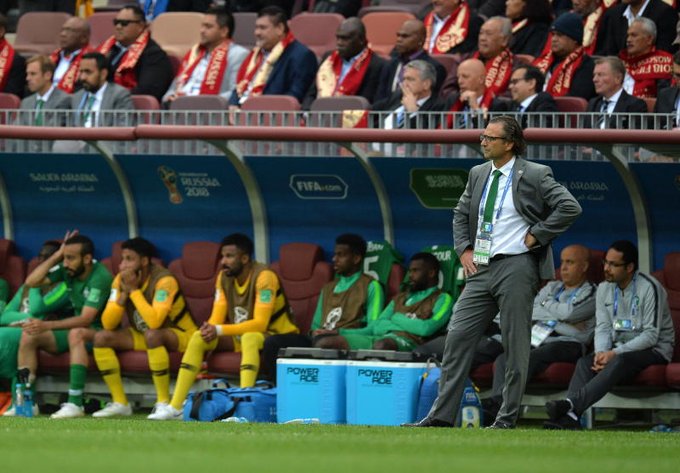 Saudi Arabia coach Juan Antonio Pizzi described a “feeling of shame” after his side suffered a 5-0 hammering at the hands of hosts Russia in the World Cup’s opening game at the Luzhniki Stadium on Thursday.

“The opposing team really didn’t have to make a huge effort to win this game,” he said after a one-sided showing that marked a dream start for the home team in front of a capacity crowd.

“We have now to forget this feeling of shame and start thinking about the next match.”

Yet given Saudi Arabia’s high turnover of coaches, including a previous mid-World Cup sacking, the Argentine-born Pizzi could well be on his way before he gets a chance to try and rectify the situation.

He conceded questions about his future after the heavy defeat were justified.
“The way I feel right now makes that a valid point but whatever happens I’ve got my philosophy and I’ll try to do as best I can. I trust in our plans and I trust in my players and I trust we’ll have a better performance in our next game,” he said at the post-match news conference.

Pizzi was appointed to the job after Saudi Arabia qualified last year for the finals. They inexplicably sacked Bert van Marwijk despite a successful campaign and then his successor Edgardo Bauza before the World Cup draw in November.

Pizzi has been in charge for the last seven months and insisted the Saudis had shown much improvement since.