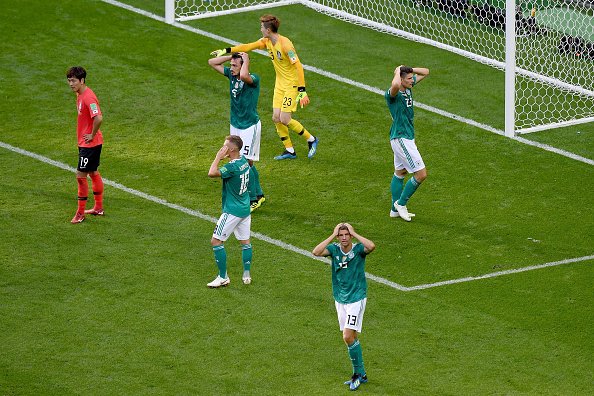 Germany have been dumped out of the 2018
World Cup after suffering a 2-0 defeat at the hands of South Korea in Wednesday’s Group F clash in Kazan.

Sweden’s 3-0 victory over Mexico meant that Germany needed to record three points but late goals from Kim Young-gwon and Son Heung-min condemned the defending champions to their first early exit since 1938.

Both teams went into this contest knowing that victory could secure their place in the knockout stages but chances were few and far between during an opening 45 minutes which was largely placed at a pedestrian pace.

With Sweden continously leading over Mexico it meant Germany desperately needed goals. With three minutes left, Hummels should have scored when meeting an inswinging cross but the centre-back somehow sent his free header off target from no more than eight yards.

South Korea had appeared finishing from an offensive perspective but twice in six minutes of added-on time, Shin Tae-yong ‘s side twice found a way through to condemn Germany to one of the darkest days in their history.

The assistant initially ruled out Kim’s opener – which was netted from close range after a corner – but VAR showed that two Germany players touched the ball before it reached the defender, leaving the referee to reverse the initial decision.

Germany now needed two goals and the ball was delivered continuously into the penalty area but with goalkeeper Neuer left stranded after going up for a corner, a long ball was played through to Son who reached the ball inside the six-yard box before tapping into an empty net.

Mexico qualified for the last-16 stage of the 2018 World Cup despite suffering a 3-0 defeat to Sweden in their final Group F clash on Wednesday afternoon.

Sweden’s three-goal success has seen them win the group , while Mexico have gone through in second due to Germany’s 2-0 defeat to South Korea.

Sweden swept through second half goals from Augustinsson (50’), Granqvist 62nd penalty kick and an own goal by Alvarez in the 74th minute.