Knowledge Musona has dismissed the rumours suggesting that he is considering a move back to his former club, Kaizer Chiefs.

On Wednesday, there was a story published in a South African newspaper saying the Warriors skipper wants to return to Chiefs so that he can “resuscitate” his career. This comes after Musona has been struggling to get some game time at Belgian giants, Anderlecht with the publication claiming that he no longer cope with the European football due to age.

But the 28-year-old, is not considering any move to South Africa anytime soon.

He posted on Twitter saying: “To all my lovely Kaizer Chiefs supporters.The rumour circulating on social media is not true.I never said i will not come back but time will tell.Thank you for the love you have shown me even if i left years ago.You deserve the best.Love Y’all ❤️&✌.” 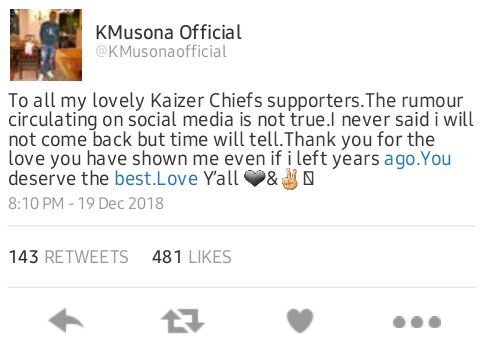 Last season, rumours ermeged linking the player with a return to Amakhosi but his agent rubbished them as false.

Meanwhile, reports in Belgium have also linked Musona with his former club KV Oostende ahead of the January transfer window but that move can be put on hold following the sacking of Anderlecht head coach this week.