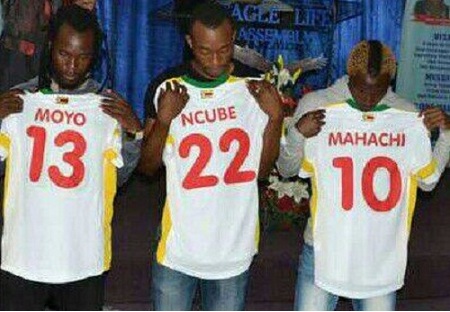 Warriors trio of Kuda Mahachi,Peter ‘Rio’ Moyo and Kingston Nkatha inspired the Warriors to a 4-1 victory over Malawi in an international friendly at Kamuzi Stadium,Malawi.

The pair of Peter Moyo and Kuda Mahachi were involved in accident just days ago while traveling to joining the Warriors camp in Harare, but they seemed to have recovered well as they  made it on the score sheet with Kingston Nkatha.

A magnificent strike from Peter ‘Rio’ Moyo in the 12th minute after a long throw from Milton Ncube was not dealt with by the Malawi defense got the ball rolling .

The Warriors were never really threatened except for some long but harmless shots by the Flames, but overally they controlled the half with some enterprising passing in the middle of the park with the goal scorer showing great vision in his passing.

The hosts came back rejuvenated and four minutes into the second half they found the back of the net after some poor defending on the right side allowed Kamwendo to cross and the striker Konjwa was there to head the ball.

That was the last bit of attacking play that would cause threat for the Warriors as just after that Nkhata put in a good cross from the right flank and the diamond boy Kuda Mahachi was there to head the ball into the back of the net to restore the lead for the visitors.

Nkatha then found the back of the net to make it 3-1 after some enterprising play on the flanks and then completed his brace putting the final nail on the Flames coffin after some great work by Mahachi on the wings to cap a beautiful day for the Warriors.