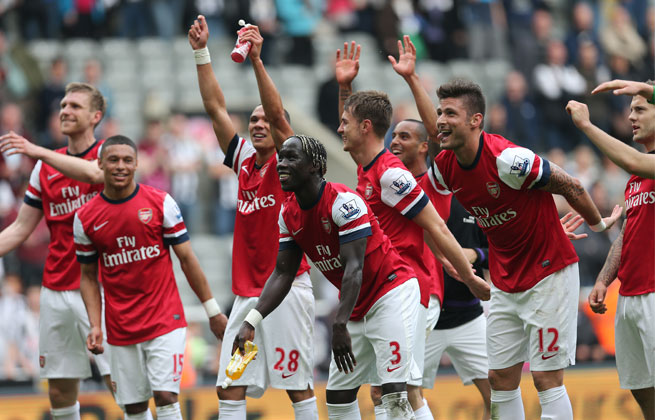 A thunderbolt from Tomas Rosicky after just 72 seconds proved enough for the Gunners to earn a first victory over Tottenham Hotspur at White Hart Lane since September 2007.

Arsenal took full advantage of leader Chelsea’s loss to Aston Villa on Saturday, taking the lead inside two minutes when midfielder Tomas Rosicky rifled in an unstoppable shot from the edge of the area.

Alex-Oxlade Chamberlain should have doubled the visitors lead in the 15th when he raced clear on goal, but his attempted lob sailed well wide of goal of goalkeeper Hugo Lloris’ goal.

Another swift counterattack by Arsenal eventually saw Oliver Giroud square the ball across goal in the 26th, but Oxlade-Chamberlain’s shot deflected wide.

Tottenham’s striker Emmanuel Adebayor was unable to divert his shot inside the far post following a right-wing cross from Townsend shortly before the half-hour mark.

Oxlade-Chamberlain blazed high over the bar from the edge of the penalty area, after Rosicky had rolled the ball into his path, having robbed Danny Rose in the 41st.

The hosts started the second half with real purpose, and should have equalized in the 46th through Nacer Chadli. However, he failed to convert from close range after goalkeeper Wojciech Szczesny fumbled the ball in the area.

Spurs continued to press forward and Chadli missed another opportunity in the 52nd. The Belgian international attempted an extravagant flick deep inside the penalty area following Andros Townsend’s right-wing cross.

That win lifts the Gunners into third place on 62 points, four adrift of league leader Chelsea, which it faces next Saturday.

In the other match played, Liverpool thrashed Man United 3 nil at the Old Trafford to keep their title aspirations alive.