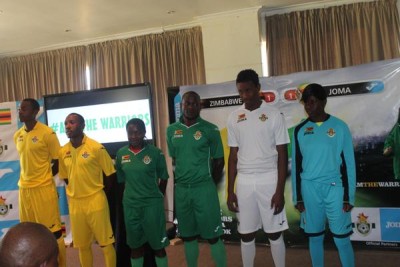 The launch was dubbed #ArmtheWarriors.

The brains behind the deal is Patriarch Princepsa a company owned by Danish based Warriors midfielder Quincy Antipas.

Speaking at the function JOMA representatives said the partnership/marriage heralded a new ZIFA.

Karim Sali of Joma Sport set they had signed a two year deal with ZIFA with an option to renew.

The Warriors will use the JOMA kit for the first time against Guinea in a AFCON qualifier next weekend.

ZIFA President Cuthbert Dube said “It had taken them a long time to come up with the deal and were happy it had finally happened. At least we are doing something in the face of this criticism.

Dube admitted that the image of ZIFA was bad and hoped the deal would go some way in correcting that.